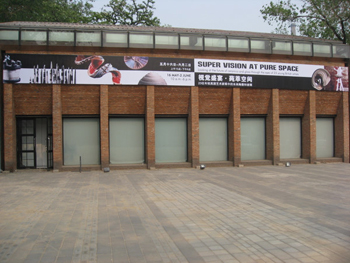 Pure Space, 798 Art District, 2 Jiuxianqiao Lu, Chaoyang district, Beijing
16/05/2010
Pure Space, 798 Art District, 2 Jiuxianqiao Lu, Chaoyang district, Beijing. This event was organised and curated by Stephen Higginson of Super-Vision. I met Stephen at Ceramic Art London 2010, and he generously took a selection of work to his innovative exhibition in Beijing. An ad. for this event appeared in Time Out Beijing.
In Stephen's words..."The work was certainly very well received, and attracted good publicity - including a full page in the Beijing Morning Post - and I was approached by other galleries, art foundations and show organisers to work with them. One well known Chinese artist gave the show a great write-up on his blog after visiting – and buying - and blogged that the work on show should be considered as ‘real art’".
Next
Previous